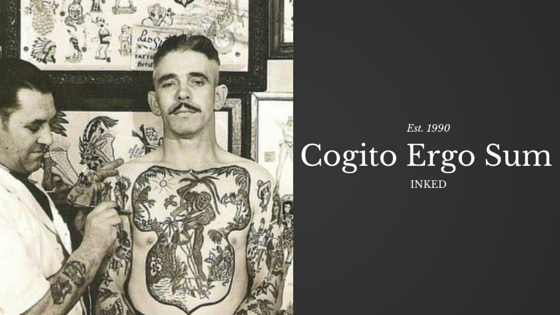 I think most people are familiar with the latin phrase ‘Cogito Ergo Sum’ which means ‘I Think Therefore I Am’.  It’s from Rene Descartes ‘Discourse on Method’ from 1637.

What very few people would know is that it was also my 1st tattoo.  I got it when I was 16 and had just discovered Albert Camus, Jean Paul Sartre and of course Descartes.  In one fragile year of intellectual discovery I effectively shut down my emotional self and discarded any possibility of a spiritual life.  I reasoned that all I needed was to trust in myself and my logic and if I couldn’t see it, it wasn’t real.  I became one of those very annoying “Bullet Point Atheists”, my arguments were literally only skin deep.

It didn’t take long before I realized that I didn’t have the knowledge to back up my arrogance and I stopped showing people my tattoo.  I felt like a fraud to have that phrase on my arm when I didn’t even really understand what it meant.  The idea of what it represented was what I was attracted to.  I didn’t want to acknowledge my emotional side (too painful) and as far as spirituality went, I felt truly abandoned by any kind of God.  That only left logic and reason.

My teen years were challenging,  it sucks to be a teenager no matter who you are but I don’t think I had the tools to handle the challenges that came up.  My feelings were dark and depressive during that time, I know I retreated into a world of reason & knowledge, not to learn but to hide.  I couldn’t handle the loneliness of those years and I reacted to the environment I was in by shutting out anything that could hurt me.

For 13 years that tattoo was a real regret on my part.  Whenever anyone saw it I would pray they didn’t know what it meant, I would always make up random meanings for it to change the conversation.  I was so embarrassed of what it represented, while I felt like a fraud when I was younger, I felt like an pretentious idiot as I as got older.  I realized that trying to live in just one domain (mind) for so long was limiting my growth and joy.  If I wanted to really engage with the world I needed to be comfortable in my own skin, and that meant learning to be comfortable with my emotions.  It also meant I had to get that damn tattoo covered!

Well the tattoo is long gone, I had it covered by a Japanese pagoda 10 years ago.  It took a while to step into my emotional self and feel okay, it’s a work in progress, but the work is really satisfying.  In the last 18 months I have really found my spiritual side.  Meditation has become a very important part of my life.  Through meditation I’m feeling the connections all around me and it’s amazing.

I think about that 16 year old kid who got a dumb tattoo to show the world he didn’t need to be vulnerable or to be protected.  I used to feel sorry for him but I don’t feel like that anymore, I’m proud of him.  That tattoo was his shield and I‘m proud that he did what he had to do and he made it through.